Travis Scott and Kylie Jenner – The mysteries behind their relationships

Today we are gonna talk about the most interesting personality in the Hollywood, Travis Scott- American Rapper and Kylie Jenner- American media personality and businesswoman. They had dated each other for atleast two years(2017-2019). So I am gonna tell you about how it started and came to an end.

After breakup with Tyga(American Rapper) Kylie Jenner moved on in her life forward. They both ended up their long term relationship.

Kylie and Travis met at Coachella while Scott was on his tour, they have been spotted holding hands and from then they came closer. After that kylie decided to join Scott on his tour. This was the time when rumors came out that they both have been in relationship. Finally Jenner told GQ that they are together in relationship. Travis tells kylie “ ‘I am going back on tour—what do we want to do about this?’.” Then she decided to join tour with Travis. 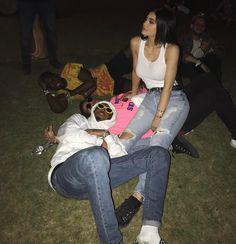 After sometime they were spotted in an NBA game holding hands and cuddling each other. At this time it was official that they were dating each other. Things get serious when Kylie went to meet travis’s parents.

In may 2017, according to news kylie’s pregnancy was confirmed on may 1st.Also at the same time travis and kylie spotted hanging out at met gala.

Kylie spotted at Scott’s birthday with his friends and kendall jenner. After that they both spotted at yacht in Miami spending night together.

Kylie and Scott posted a photo on snapchat showing the tattoo of butterfly on there ankles it might be the reference of the travis’s song butterfly effect. Later on the sign of butterfly became symbol of there love. Also in butterfly effect song travis had mentioned his love for kylie. In the same month they both spotted wearing same rings leading to assume that they were engaged.

Kylie Says in GQ article that on her birthday in the morning when she woke up from the bed she was greeted by an orchestra and flowers all the way down his house. Travis set up all this present to surprise kylie and also he gave him 60,000$ Choker with butterfly featuring in it. As mentioned before butterfly is probably the sign of their love.

I'm passionate about writing and coding persuing my B-Tech CSE at Ahmedabad University. This blog is dedicated to technology, health, and to our readers. I like to spend time reading the latest business techniques. My hobby is reading, write, and listen to music in my spare time. Get in touch with me for eCommerce Marketing Solution: drashtisoni019@gmail.com keep reading keep loving!!!
Next Post 1984